Each year, Mary Gingrich, MD, Dallas Niermeyer, MD Emeritus and Clark Niermeyer, President, announce and congratulate a band member selected as the year's Prairie Brass person of the year for exemplary attitude, dedication, service and musicianship. In 2019, our recipient is Dan Landbo.

Congratulations to all of the past recipients from the entire Prairie Brass Band family. 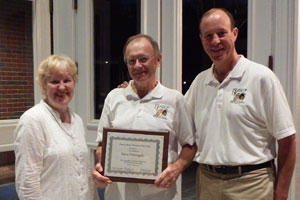 Prairie has a new partner

The band has agreed to produce two concerts each year at the forest View Education Center Theatre as a part of the rapidly growing and varied schedule of concerts at the Center.

Prairie is the only brass band invited to join the lineup of world-acclaimed artists and performers presenting programs throughout the year. No stranger to the venue, the band has presented concerts there three previous times featuring World's Champion Whistler David Morris from Dobcross, UK.

The band kicks off its new series with a concert on March 27, 2011 featuring famed jazz trumpet artist Bobby Lewis (www.bobbylewis.com) Bobby will be performing with the band on trumpet, flugel horn, cornet, and even singing a chorus or two!

Says band president Clark Niermeyer,"We are thrilled with the opportunity to present entertaining and accessible brass band music to the greater Chicago suburban area for many years to come."

(April 14, 2007) - The Prairie Brass Band recently traveled to Indiana University Southeast in New Albany, IN, to compete in Honors division in the 2007 North American Brass Band Association Championships, held on April 14. The band performed two pieces: "Un Vie de Matelot" by Robert Farnon (band choice) and "The King of Elfland's Daughter" by Rodney Newton (Honors division test piece). Of particular note is the fact that Rodney Newton, the composer of the Honors division test piece, also served as adjudicator for the division and gave Prairie the highest scoring in the division for the performance of his test piece. [Full Results]

(November 4, 2006) - Eric Yates, principal cornet, won the award for Best Cornet at the 2006 US Open Brass Band Championships, recently held in Arlington Heights, IL. The prize for the award was a new, custom-built Courtois cornet engraved with the inscription "US Open - Best Cornet - 2006", which was provided by contest sponsors, Buffet Crampon.

Eric Yates holds a Doctor of Music degree in Trumpet Performance form the trumpet studio at Northwestern University. Eric is currently Principal Trumpet in the Northbrook Symphony, is currently a member of the Chicago Brass Choir, and is a founding member of the Lakeside Brass of Chicago, in addition to his current position with the Prairie Brass Band. The Prairie Brass Band congratulates Eric on winning this prestigious award at national competition

(November 4, 2006) - Long time bass section member and former PBB board member, Lothian Hamilton, played his farewell performance with the band at the 2006 US Open Brass Band Championships. Lothian leaves the band to move East in preparation for marriage to his fiancee this coming May. During his 9 years with the band, Lothian has played both Eb and BBb in the bass section, has served as PBB webmaster for the past six years, and has been an integral part of the organization and management of the band in his position on the PBB Board of Directors. The Prairie Brass Band thanks Lothian for many years of service and dedication to the band and wishes all the best to Lothian and his bride-to-be.

Bette's impressive career began over five decades ago when she was appointed principal trumpet of the Chicago Civic Orchestra at the age of 17 and encompasses performances and recordings with such groups as the Chicago Symphony Orchestra, the Lyric Opera of Chicago, and solo performances with numerous groups. In addition, she has an extensive career as a music educator having taught at several universities, colleges, high schools, and other camps and programs.

The Prairie Brass Band congratulates Bette on this honor and on her fantastic career, and we are overjoyed to have her as a member.

First Ever PBOY Award Given

The award was presented at the band's final concert of the summer season at Rotary Village Green in Buffalo Grove, IL and consisted of a mounted certificate and a gift card.

The award was in recognition of Carol's dedication, devotion, attendance, performance and continued service to the Prairie Brass Band. The entire band joined Musical Director Dallas Niermeyer and the Board of Directors in a profound expression of thanks for Carol's many years of quiet service to the band.

While Carol is the first recipient, the board plans to continue the award in subsequent years. Said Band President Clark Niermeyer at the party following the concert, "Carol has done an exemplary job as band librarian and it's well past time that her service and devotion to the band was publicly recognized. We are proud to have her as a member."

(March 13, 2005) - Cyndi Salata, the principal cornet player with the Prairie Brass Band, took home the title for best Technical High Brass Solo at the annual North American Brass Band Association championships held March 11th and 12th in St. Charles, Illinois. Competing against a talented field that included musicians from across the United States, Cyndi's performance was judged to be the best of the bunch!!

Cyndi has been PBB's principle cornet for seven years, since shortly after the band was founded. She has competed several times in the solo contests at previous NABBA championships, but this marks the first time she has walked off with first place. So, from all of us in PBB, congratulations Cyndi - we couldn't be happier for you!!